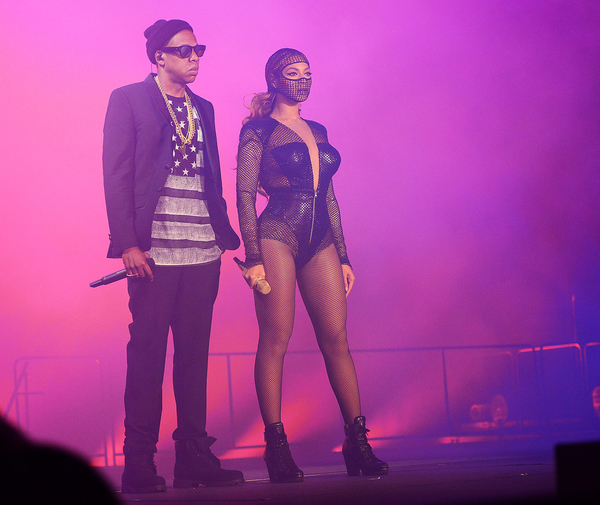 SEATTLE, WA – JULY 30: Beyonce and JAY Z perform on the On The Run Tour at Safeco Field on Wednesday, July 30, 2014, in Seattle, Washington. (Photo by Mason Poole/Parkwood Entertainment/PictureGroup).

Beyoncé and Jay Z’s On the Run Tour touched down at Seattle’s Safeco Field Wednesday night, marking not only the stadium’s second show ever (Paul McCartney was the first) but quite possibly the most spectacular – and loudest – concert to be hosted there for years to come. A constant swirl of rumors and speculation surround pop music’s most famous power couple: but Mr. and Mrs. Carter are doing just fine, thank you. Individually they are two of the world’s most successful entertainers, boasting decades in the business between them. Sharing a stage on Wednesday night the Carters proved that when it comes to putting on a show, together they are untouchable.

The couple appeared just after 9pm, skipping the opener and cutting right to the chase. “The chase” was a recurring theme throughout the evening, kicking off with “03 Bonnie & Clyde” and a larger than life visual montage of heists, shoot-outs, and other cinematic postcards from the nomadic and preternaturally glamorous life of the country’s most wanted criminals. It was hard to miss the connection to real life (in fact the words “This Is Real Life” flashed on screen pre-show), as it’s common knowledge that the couple is mercilessly hounded by media and critics at every turn. But let’s face it: Bey and Jay wrapped in each others’ arms, with those beautiful doe eyes peering at you from a ski mask? Adorable. The theme works on all counts.

From floor level the excitement generated by both the couples’ entrance and the chest-thumping bass was deafening, as Jay Z strode around the stage in top form, dressed in his best black sunglasses, gold chains, black jacket, and a cool (and presumable expensive) black and white star-spangled tshirt. Beyoncé darted and danced around him in the tour’s emblematic mesh and leather bodysuit and mask. “Show Me What You Got”, “Upgrade U”, and “Crazy In Love” shook the stadium with sheer volume and intensity. The J + B sonic assault was off and running, a tightly constructed string of medley-like, almost whole songs that mixed seamlessly one into another. Those on the floor, for one thing, stayed on their feet for the entire performance. 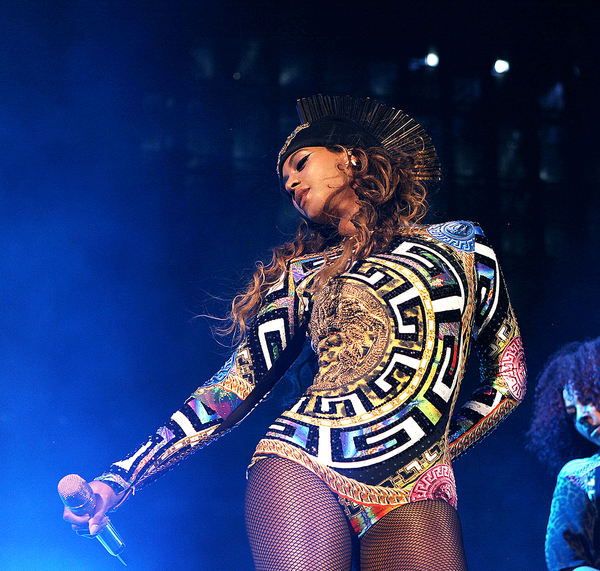 “N***as in Paris” and “Tom Ford” allowed one of the evening’s dozen or so costume and makeup changes for Beyoncé, who heroically emerged every couple of Jay Z songs looking fresh and beautiful in a new ensemble along with her impressive gang of backing dancers. Many of Beyoncé’s hits were cleverly reworked for the tour, “Run the World”, “Ring the Alarm”, and “Diva” among them, all keeping the energy as high as Beyoncé’s dancing heels (of which there were many throughout the evening). The mega-talented duo continuously switched off on vocals with never a pause or dull moment. Jay Z also popped in and out for quick changes when B took the mic, reappearing in various combinations of leather vests, jackets, and tasteful t-shirts.

“Big Pimpin” featured cleverly manipulated footage of a jazz age club in which what appeared to be Josephine Baker and other dancehall figures gyrated, momentarily giving the illusion that the on stage Jay Z was simultaneously part of the action yet also a character in the background, smoking his trademark cigars in the black and white party scene. “Ghost/Haunted” and Jay Z’s Frank Ocean & Kanye West collaboration “No Church In the Wild” flashed more phenomenal visuals; clearly the Carters spared no expense in the realm of artistic vision or costume changes.

The halfway mark of the show was, unbelievably, about 22 songs in (the set list included 44 songs in all) with “Drunk In Love”, “Why Don’t You Love Me”, “Holy Grail”, “Beach Is Better” and of course, “99 Problems”. That song cleverly tied in to “If I Were a Boy”, Beyoncé driving the point home in a sexy, tomboyish soft leather romper. “Resentment” was the moment many were waiting for, Beyoncé delivering her infamous and confessional “12 years” lyric change from the catwalk. Perception is subjective, but it seemed in studying Beyoncé’s face (on the giant video screens at least), that she appeared slightly more guarded during the infidelity-themed song. There was a long, long pause…and then it was over. Jay Z rejoined his wife onstage, and she called out something about love and notably, forgiveness. Then the show moved on to “Izzo (H.O.V.A.)” and still more high points with “Single Ladies”, “Hard Knock Life”, and an amazing “Pretty Hurts” (amusingly the backup dancers illustrated this song by balancing books on their black-bobbed heads).

The non-stop spectacle wrapped up with a cover of “Forever Young”. Jay Z took Beyoncé’s hand and stood beside her as she mixed in “Halo”. Home videos of an intimate Carter family life played during the emotional song: the couples’ daughter Blue Ivy playing with her parents, footage of their wedding ceremony, Beyoncé’s pregnancy, and briefly, the baby in the hospital. Images of their travels and adventures gave a brief but intimate look into the life of a couple deeply in love, regardless of what may or may not have happened since. “Lift Off” was the outro, and then they were gone, leaving a stadium of blown away audience members behind them.

All mega-star egos aside, On the Run delivered a world-class show with energy, polish and true grit that no one besides Madonna has been able to deliver in such massive scope.  Beyoncé and Jay Z have more than earned their place as pop royalty, not to mention very likely setting a record for the number two top grossing tour of all time (second only to U2’s 360 Tour). If you missed it, take heart: On the Run is set to broadcast in its entirety on September 20 on HBO. 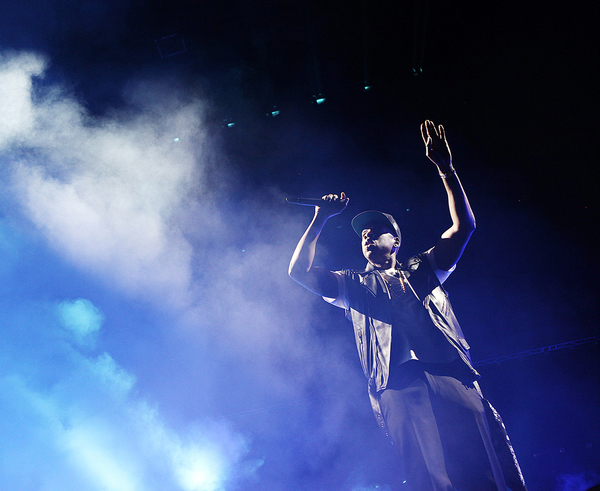 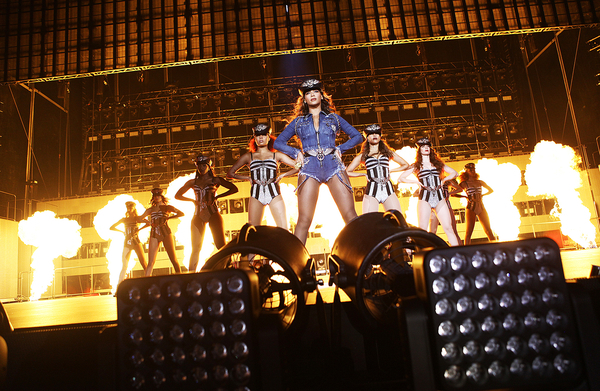 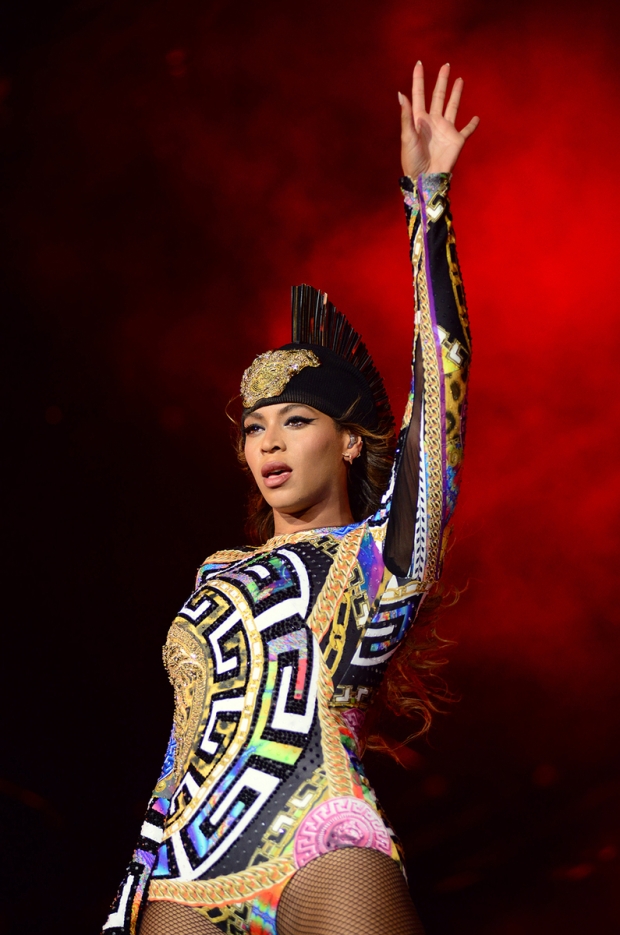