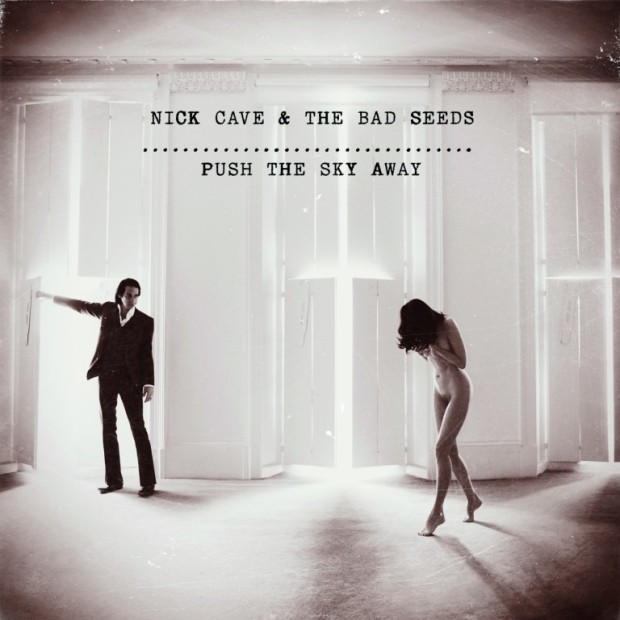 Nick Cave & The Bad Seeds don’t look the part of international chart-toppers with six #1 positions worldwide  and an independent album at #29 on The Billboard 200 (Push The Sky Away is their highest ever placing in the U.S.)  If you were to cross paths one wouldn’t be faulted for passing on the other side of the street, instinctively suspicious of the strange, neatly suited rogue with jet black hair or the wild, Rasputin-like figure of multi-instrumentalist Warren Ellis at his side.  The Bad Seeds have always looked more like apocalyptic preachers than traditional hit makers.  The band, led by singer/composer Nick Cave, opted out of popular music’s path of least resistance a long time ago; in fact it’s been that way since their unruly beginning in 1984. Appearing at the completely sold out Paramount Theatre, the most marked change since those days is the band’s social media accessibility and the median age of the fans.

Nick Cave in his mid-50s is a more refined figure than he was in younger days, but ‘refined’ is relative when you’re speaking of a man whose string of 15 exceptional albums draw from a deep well of diabolical characters and tales of vengeance, temptation, and wrath.  Which isn’t to say he’s one dimensional or lacking in humor: Hannah Montana and Avril Lavigne appear in Nick’s work in ways both menacing and farcical, as if he’s a perversely fascinated wolf spying on pop culture innocents and poised to take a bite.  There’s also Nick Cave the romantic, whose deep baritone delivered sincere wonder at the mysteries of love Sunday evening (he’s been married to former British model Susie Bick since 1999).

Part of Nick’s uniquely enduring appeal is his ability to build momentum through a rare combination of storytelling and mania, jumping and shaking through a nearly two hour set filled with all manner of dark impulses.  Opening with “We No Who U R”, Nick led the current Bad Seeds (six musicians and two backup singers) through songs spanning his entire career with no gimmicks or frills, but plenty of feeling.  “From Her To Eternity” – from the Bad Seeds’ 1984 debut- remains a masterpiece nearly 30 years on.  Other unexpected surprises were “Jack The Ripper”, “Deanna”, “The Weeping Song” and epic death row tale “The Mercy Seat”.   Push the Sky Away figured largely into the set; understated songs such as “Jubilee Street” swelling to a stunning crescendo with dual drummers and textured arrangements.  The album’s sparse moments were elevated to the most ferocious, the two smartly-dressed backup girls barely able to flail their arms in time with the music.  “Red Right Hand” was given extra muscle with layers of percussion.  “Wide Lovely Eyes” and a trio of songs accompanied by piano brought the mood into quieter territory (albeit only momentarily) with “Love Letter”, “And No More Shall We Part”, and “People Ain’t No Good”.  A sinister, somewhat campy rendering of “Stagger Lee” ended the main set, with the band momentarily returning for 1985’s “Tupelo” and the haunting atmospherics of title track “Push The Sky Away”.

With a highly acclaimed hit album on his own new imprint, Bad Seed Ltd., Nick Cave seems poised to embrace a fiercely independent future.  Push The Sky Away is an artist hitting yet another creative peak in a rich career that grows more compelling with time.  To borrow from Nick Cave’s letter to MTV in 1996 (asking to be withdrawn from nomination for “Best Male Artist”): “I have always been of the opinion that my music is unique and individual and exists beyond the realms inhabited by those who would reduce things to mere measuring. I am in competition with no one.”