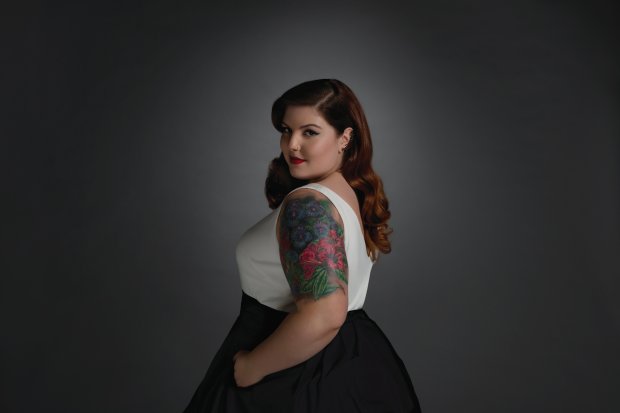 Mary Lambert is already having the kind of year that just twelve months ago she couldn’t have imagined. As the homegrown chanteuse explained to a full house at downtown’s Showbox on Saturday night, just a year ago she was still bartending in Seattle.  Fast forward to 2014: Mary’s unforgettable guest vocal and writing contribution to Macklemore & Ryan Lewis’ “Same Love” took her all the way to the 56th annual Grammys, where she performed alongside her Seattle hiphop cohorts, not to mention Madonna and 33 couples tying the knot mid-song by officiant Queen Latifah.  It was a fairly unreal experience, as reversals of fortune go.  “You know I’m emotional,” Mary joked, one song into her headlining hometown show. “But I cried…I cried, and Madonna dried my tears with her leather vest, and I am now blessed.”

The runaway success of Macklemore & Ryan Lewis resulted in many unforeseen milestones; not the least of which is the spotlight now shining squarely on Mary. “Same Love” became a part of the national dialogue on marriage equality in 2013, its heartfelt message one dear to Mary’s heart. Many of her songs and poems set to music explore growing up gay (Mary, now 24, grew up in Everett and graduated from Seattle’s Cornish College of the Arts) and her attempts to connect with unattainable ideals of what a woman should be, and what a woman’s body should look like. It’s a struggle dissected on Mary’s current EP out on Capitol Records, Welcome to the Age of My Body.

So was her homecoming show – her first ever headlining the Showbox – a crowning achievement to an incredible year of hard work, or just a glimpse into Mary Lambert’s future?  The answer is clearly both.  From the very beginning of “Sarasvati”, Mary showed herself (to newcomers, that is) to be a radiant performer, full of laughter and a megawatt smile even while introducing songs only half-apologetically as “super, super sad”. Maybe so, but Mary manages to rise above her own painful experiences with abuse and personal heartbreak to deliver songs that are more contemplative than anything else.  Self-pity doesn’t enter into the world that Mary observes around her; she finds it much too full of beauty and fragility to dwell on the past. In “Forget Me” and “My Moon’ from her self-released first EP Letters Don’t Talk, Mary’s voice slipped easily from soaring and clear to rich and purring all in the turn of one phrase. The unflinching “Body Love” and the sensational “She Keeps Me Warm” closed out the concise and heartfelt set, with one encore.

Although Mary’s first full length is yet to be released (she told Seattle Gay News recently that it should be “wrapped up by May or June”), it’s apparent she will be a rising star in 2014-2015.  And how has working with a major label panned out so far? Mary joked that Capitol has been amazingly supportive about releasing an EP of songs and poetry about body image from a lesbian titled Welcome to the Age of My Body.  The upcoming full length will be produced by Eric Rosse (Tori Amos, Sara Bareilles). With her heart on her sleeve, that incredible voice, and a sense of humor to keep her going – it surely won’t be long before Mary Lambert will be in the running for a Grammy of her own.