When Prince drops new material on his website and announces that in less than a month he’ll embark on a nine city tour of intimate venues, you better pay attention, and you better do it fast.  Even with tickets priced at $250 for each of the four Seattle shows (two per night), three were sold out before many fans could roll some change and march on down to the box office. (Predictably, the fourth show sold out at the door).

An intimate, unforgettable evening was exactly what Prince delivered.  The chemistry with his brand new all-female band 3rdEyeGirl is incendiary, reminiscent of the perfect symmetry once found with those other girls (Wendy & Lisa from The Revolution, circa 1983-1986). Seeing Prince’s colossal genius stripped down to a basic setup of two guitars, bass, drums, and occasional keys (by Prince, of course) was a rare treat. The late show Thursday night felt like an invitation to an afterparty where new material, rarities, and some seriously heavy jamming were exactly what Prince felt like serving up.

And so he did.  Everybody knows that hits fly effortlessly from his fingers (seven Grammy Awards don’t come for free), but underneath the hugely successful commercial hits, Prince should be widely recognized for the fiercely independent artist and bona fide guitar prodigy that he is.  At times, the set veered into such heavy, crunchy territory that the sound was deafening in the best possible way- Jimi Hendrix being the only possible reference in terms of sheer innovation and ease.  (At 54, Prince looked fighting fit and not unlike Hendrix, sporting a short Afro and a black ruffled shirt).  Opening with a reworked, throbbing “Let’s Go Crazy”, the set plowed through a hefty back catalog from which Prince undoubtedly spent time culling the very best rarities, album tracks, and new material to show off with the girls.

“Endorphinmachine”, “She’s Always In My Hair”, and “I Like It There” preceded even earlier tracks “When We’re Dancing Close and Slow”, “Bambi” and “Let’s Work” from Controversy.  The Sign O’ The Times album was also prevalent with “I Could Never Take the Place of Your Man” and “U Got the Look”. 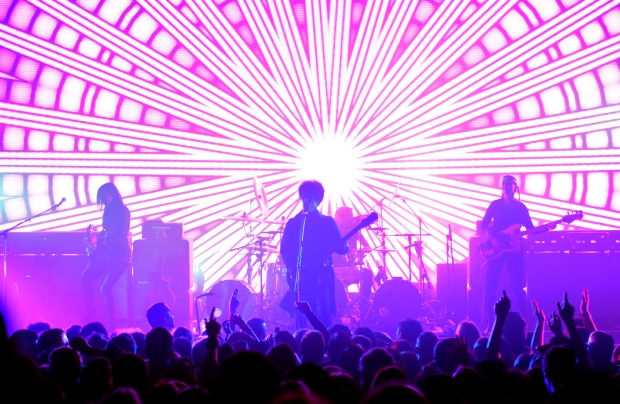 “Ready for some lip-synching?  Everybody’s doing it,” Prince teased, as slick new track “Screwdriver” began and the lyric video flashed in bright retro colors on the screen behind him. (Did he really lip-synch? Not a chance.) The 3rdEyeGirl material, including “Plectrum Electrum” and “FixUrLifeUp”, is energized and solid.  Prince is clearly in the midst of an inspired streak, getting busy in more ways than one, thematically speaking. Making love, falling in love, ladies acting up, a healthy pinch of spirituality- all the themes we’ve come to expect from Prince are present in the new songs. The new material also reveals a dose of wry humor and lyrical barbs, something else Prince is known for.  He speaks his mind, though at times it may be in the form of a riddle.

The late show Thursday night was rewarded with more off-the cuff surprises than the earlier set. “I said I wasn’t going to do this…but it’s the late show,” Prince relented at encore time, firing off a hit sampler to level all in its path and making the audience lose their minds with “When Doves Cry”, “Hot Thing”, “Nasty Girl”, “Alphabet Street”, “A Love Bizarre”, Darling Nikki”, “Pop Life”, “I Would Die 4 U”, and “Housequake”.

The club dates were in many ways the flipside to Prince’s last Seattle-area appearance at the Tacoma Dome in December 2011. Where the Dome show was a satisfying but lightning-quick trip through the hits; the Showbox was more of a slow-burning workout. Classics were reinvented and the set plunged deep into Prince’s favorite tracks. Which is really what any fan would want: Prince unleashing his genius exactly how he wants to for a few hours of transcendental music.

“We’ve got a lot of hits, we could be here all night,” Prince said.  One could only hope.