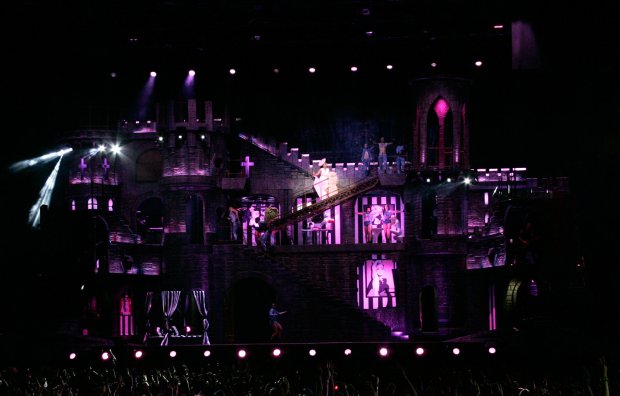 When religious picketers perch outside the gates of any concert, it’s a sure sign of a spectacularly good time.  Lady Gaga kicked off the first US date of her Born This Way Ball at the Tacoma Dome with much fanfare, including the official launch of the Born Brave bus.  The interactive outreach vehicle is bedecked with fan-generated artwork and aimed at connecting youth with local resources for issues ranging from mental health to bullying.  (Gaga herself surprised fans by appearing for a personal viewing of the bus, leading an informal champagne toast several hours before the show).

Yet despite the good works of Gaga and her mother Cynthia Germanotta (who jointly run the Born This Way Foundation), the handful of protestors loudly voiced homophobic comments and opposition, however futile. “What you are about to do is called ‘idol worship’…” shouted one young zealot, a warning gleefully met with laughter and a sea of emphatic ‘amens’ from fans.  Dressed to the nines- everyone from seven year olds with good-natured parents, shivering teenagers emulating Gaga’s most risqué outfits, gay couple of all ages, and curious bystanders- were ready to have the time of their lives inside the Dome.  And so they did, come hellfire or not.

The Born This Way Ball, a more tightly executed and presumably bigger budget affair than 2009-2011’s  The Monster Ball, was a nonstop feast for the eyes, delivering all the outrageous sets and Thierry Mugler-like eeriness one could hope for in two and half hours.  Over a dozen fantastical costume changes- the kind of showstoppers we’ve come to expect from Gaga- caused jaws to drop repeatedly and confirmed that Gaga, who turns 27 in March, is in great shape and refreshed after a month off for the holidays (the tour began last April in Korea, continuing through March in the US).  Beginning with Gaga’s emergence in futuristic battle gear astride a black unicorn that walked the stage’s fortress and around the catwalks, one outlandish ensemble materialized after another. Horned masks with three faces, alien-like headpieces, a more “practical” version of the meat dress (not to mention a meat sofa and human-size meat grinders), and a hot pink origami dress reminiscent of  John Galliano’s 2007 Dior collection all made appearances, as did all manner of silicon, latex, and leather.  Album cover imagery came to life as Gaga transformed into a motorcycle creature during “Heavy Metal Lover” and cruised along the stage’s catwalks. 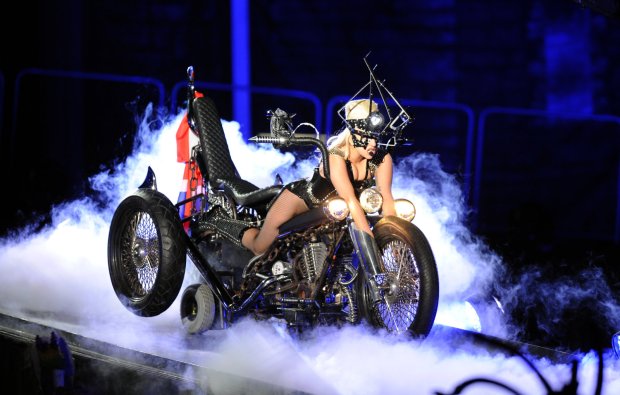 Performing the entire Born This Way album, the theme predictably hinged on acceptance and bravery but loosely tied into an otherworldly premise- something to do with alien births and G.O.A.T. (government owned alien territory, Gaga explained). Gaga gave birth to herself twice during the evening: once clawing her way out of an obscenely spread inflatable pair of high-heeled legs and a second time emerging from a translucent egg.  A hologram-like disembodied face floated around dispensing bits of narration from within a neon diamond.  Amidst this nonstop action, Gaga managed to weave in past hits “Bad Romance”, “Telephone”, “Love Game”,  “Just Dance”, “Poker Face”, “Alejandro”, “Paparazzi” and still find time for a mid-show personal phone call to a stunned audience member complete with a reprise of “Born This Way”.  She wasn’t kidding when she said “Look at your cell phones; I’m calling one of you.”

Despite her bombastic image and constant antics, at this point one would have to be completely in denial to discredit Gaga’s penchant for hit songs coupled with natural vocal strength.  Anyone that’s seen her incessant tour itinerary must recognize how hard she works, and part of the reason we’re fascinated with Gaga in the first place is her calculated insanity. The Born This Way Ball crystallizes the crazy message she’s been trying to worm into our consciousness the last five years.   It remains to be seen if literally catering to kids in songs like “Hair”, “Bad Kids”, and her stage banter will evolve with next release ARTPOP and resonate with older fans- or let’s face it, ones closer to her own age.  (It’s hard to convincingly sing about high school at 27, unless perhaps you’re watching Grease).  A tongue-in-cheek comment by Gaga herself at one point about the show “not being for children” raised the question of whom exactly her audience is these days.  It seems to be a pretty varied bunch of monsters, most of them young, but many old enough to know a ridiculously good time when they see one and “Just Dance”. 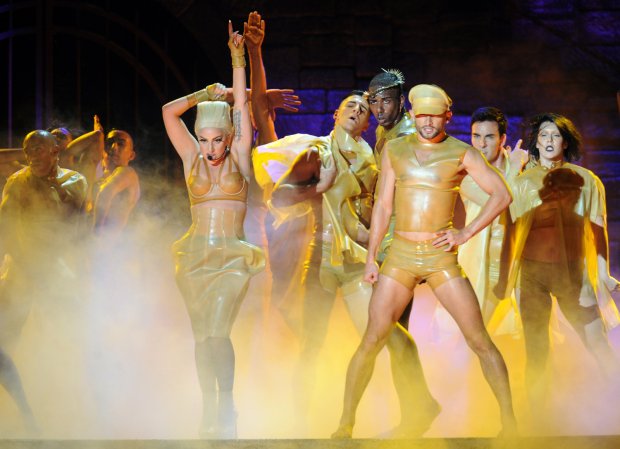